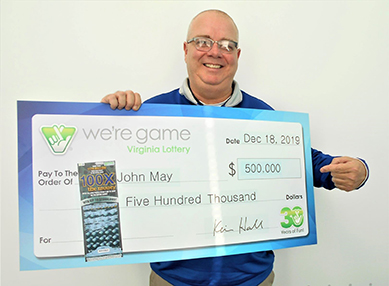 As a beer distributor, John May spends a lot of time in convenience stores for his work. He likes to play the lottery at the various stores he visits. That’s how the Hayes resident won $1 million with a Virginia Lottery scratcher ticket in June 2018.

May bought a 100X The Money ticket at J & G Food Mart, located at 1502 27th Street in Newport News, took the ticket out to his vehicle to scratch, and discovered he’d won the $500,000 prize, according to a release from the Virginia Lottery.

“I said, ‘Man, I think I just hit something good,’” he recalled as he claimed his prize late last month.