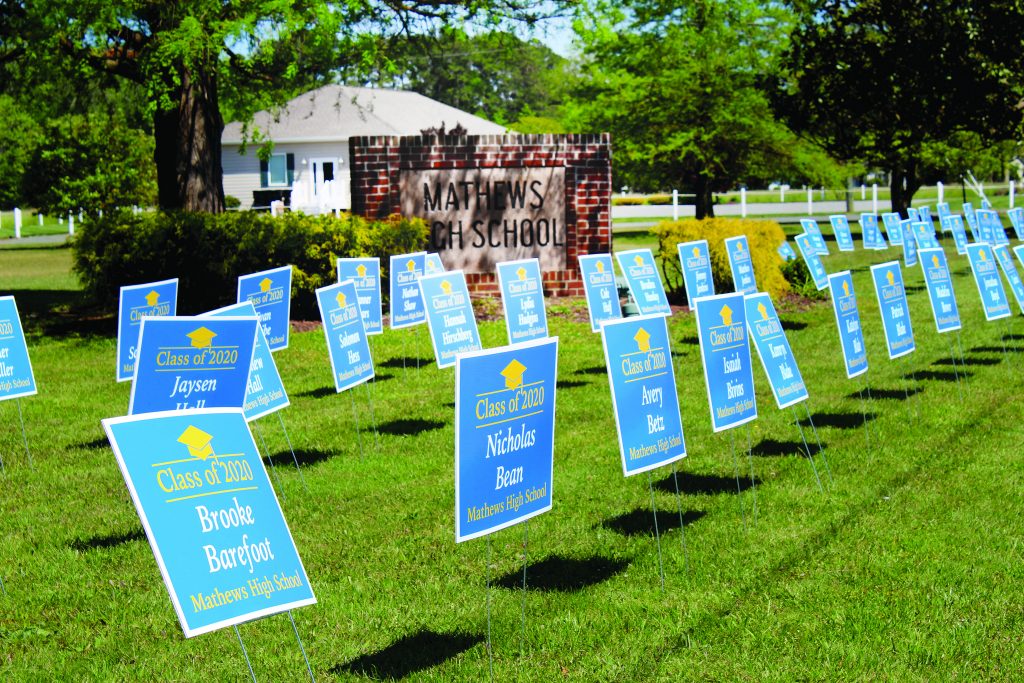 MELANY SLAUGHTER / GAZETTE-JOURNAL An anonymous Mathews High School alumnus donated a set of yard signs featuring the names of every member of the Class of 2020. According to MHS Assistant Principal Lee Anne Bray, the donor wanted the seniors to feel special and loved during this hard time. The donor worked with Coastwise Designs Signs & Screen Printing to make this happen and the company even donated a “Congratulations Class of 2020” banner. Representatives from Coastwise Designs helped put up the banner and signs in front of the school.

Gloucester High School Principal Craig Reed announced plans for the GHS 2020 commencement on Facebook on Sunday. Reed said the exercises will span the entire week of June 15 and will be held at GHS.

Reed said each senior will have an individual appointment and will be given a specific date and time to arrive at GHS. He said the dates and times will be shared with seniors and their families by the end of this week.

Seniors should arrive 10 minutes before their appointed times wearing formal attire under their caps and gowns and may be joined by his or her parents or guardians.

Reed said as graduates enter the parent loop parking lot, a staff member will direct them where to park. After parking, stay in the vehicle until a staff member directs you to enter the building.

Reed said professional photographers will be on hand to photograph the seniors as they cross the stage. They will also be able to take photos of the graduate and parents after the student has walked off the stage.

Once photographs are complete, Reed said seniors will visit a final table to pick up a few mementos from GHS and then a staff member will direct family members back to their vehicles.

Reed asked students and their families to adhere to all the rules and regulations that will be put in place on-site for the safety of themselves and others.

Reed also said that the school division is creating a feature video highlighting the Class of 2020 which will air at a later date on local cable channel 47 and on social media outlets.

Mathews High School announced plans this week for a drive-up graduation ceremony to be held at 2 p.m. on Sunday, June 7 at MHS.

According to a post on Facebook on Monday, graduation speeches and scholarship presentations will be pre-recorded and combined with the recording of students walking across the outdoor stage that day and combined for a complete graduation video, which will be released for the public to view at 7 p.m. on June 12. The video will also include a senior slideshow.

During the graduation itself on June 7, the ceremony will be limited to one car per graduate, with school board chairman John Priest set to confer the diplomas.

Additional details are expected to be announced in the coming days.