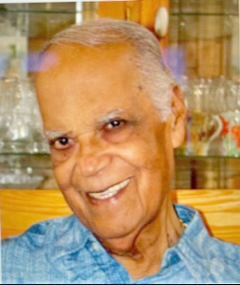 Glodowaldo Peguero of Gloucester, was born in Bani, Dominican Republic. He moved to Juana Diaz, Puerto Rico, at the age of four. He studied at the University of Mayaguez, P.R., and Middlesex County Community College, N.J. He became a Senior Designer for Amerada Hess Oil until his retirement. During his life he served in the U.S. Army Reserve during the Korean War as a Radio Operator Chief. He was also recruited by the then New York Giants to play first base in the 1950s minor league, traveling the East Coast. He was predeceased by his daughter, Dagmar Peguero and is survived by his wife of 51 years, Edwina Pereira Peguero; his daughters, Vanessa Bermudez, Waleska Peguero; sons, Glodowaldo A. Peguero II, Arnaldo Peguero and Orlando Audifre. He also is survived by several grandkids; great-grandkids and great- great-grandkids.