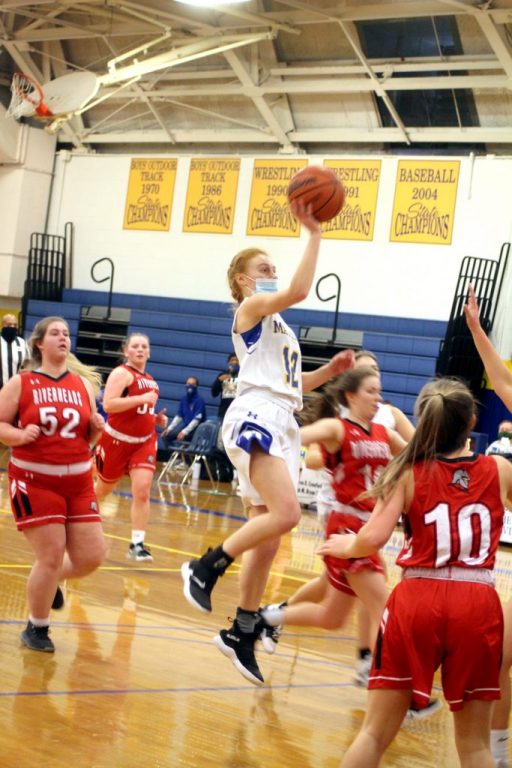 Lady Devil Connie Johnson (#12) was one of three seniors playing their last game for the blue and gold last Wednesday as Mathews fell in the state girls’ basketball semifinals to Riverheads.

The Mathews High School girls’ basketball team ended the 2020-2021 season as one of the four top teams in the Virginia High School League’s Class 1 ball.

Unfortunately, that’s as far as they would get as they were overpowered by the visiting Riverheads Lady Gladiators, 58-40, in last Wednesday’s VHSL state semifinal game.

Region A champs Mathews hosted Riverheads at the start of a Blue Devil doubleheader, with the boys taking on Altavista in the nightcap (see related story).

Riverheads had the Lady Devils reeling from the start, as Hannah Grubb hit three three-pointers in the opening seconds to put the Colonels up, 9-0. Despite seeing limited time due to foul trouble, Grubb hit a total of eight three pointers as she led Riverheads in scoring with 26 points.

Stacie Thomas was the top scorer for Mathews, ending the game with 10 ...