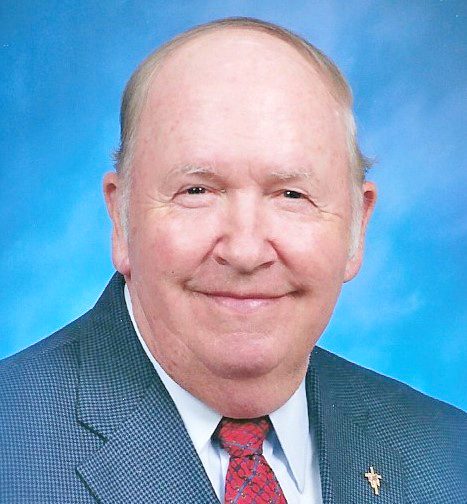 Our Lord and Savior Jesus Christ welcomed “Fred” into His Kingdom on January 13, 2023. Fred of Hayes, Virginia, passed away peacefully at the age of 88 years old, surrounded by his family. He was beloved by his family and countless friends who will miss him dearly. A devoted son, husband, father, grandfather, and uncle, Fred was known for his steadfast faith and love for his family and others. He lived a full life and was a wonderful person throughout. His greatest joy in life was being Dad, Grandpa, and PaPa to his great-grandchildren. Born in 1934 in Fayetteville, N.C., Fred grew up with seven older siblings. Fred was a 1952 graduate of Linden High School. Also in 1952, Fred married his high school sweetheart, Olive Willowdean (Dean). They enjoyed 70 years of marriage until Fred’s passing. They raised three children together. Shortly after beginning his marriage, Fred enlisted in the U.S. Air Force in 1952. He served 21 years. Upon his military retirement, he began his U.S. Air Force Civil Service career working at Langley AFB in Hampton, Va., for 21 years. Throughout his military and civil service careers, Fred served in three military conflicts, Korea, Viet Nam, and Desert Storm. During his career in the U.S. Air Force Civil Service, Fred earned many awards. He became the “Division Chief of the Systems Analysis Branch” and was selected in 1979 as the “Outstanding Civilian Personnel Manager at Headquarters Level” for the U.S. Air Force. Fred retired from his devoted career with the U.S. Air Force in 1994. He did return to part-time work after his retirement to his dream job of working at the Golf Pro Shop at Langley AFB selling golf clubs and attire to U.S. Air Force active members and retirees. Known for a life dedicated to God, Fred worshipped at several churches including Morrison Methodist Church and Warwick Memorial Methodist Church, both in Newport News, Va., and Bethany Methodist Church in Gloucester Point, Va. Throughout the years, Fred held several positions of church leadership including becoming a lay leader, finance officer, youth leader, and Sunday school teacher (both adult and youth). He served as the Lay Speaker for the Virginia United Methodist Church Council. Fred also served God via his participation in several missionary trips to several countries including Honduras, Guatemala, and Haiti. He enjoyed participating in missionary trips to West Virginia and Kentucky, specifically in the Appalachian Mountain area. Fred also worked to help the homeless through multiple church-led local projects. Fred enjoyed singing in the church choir and did so for many years. His love for singing hymns and praise songs later led to his participation in a musical group that performed for the veterans at the local VA Hospital in Hampton. While Fred loved serving God, being with his family, and working for the U.S. Air Force, he did find time for his own self-enrichment and pleasure. As a working adult and parent, he attended college on a part-time basis to earn a B.S. degree in Business. He obtained his private pilot license and enjoyed flying small-engine planes. He enjoyed being a member of several bowling leagues. He enjoyed jogging and was known for running the five-mile loop at Langley AFB during his lunch break. Fred also spent countless hours for many years swinging his golf clubs and seeing how far he could move that white ball. He dearly loved golfing and spending time with his many golf buddies. He was fortunate enough to achieve the status of making a hole-in-one. Fred was preceded in death by his parents, George and Cegretta Townsend, and six of his brothers and sisters (Annie Belle, Russel, Watson, Nellie, Elizabeth, and George). He is survived by his loving wife, Dean, and his son, Fred Jr. (Kris); his son, David (René), and his daughter, Deborah (Mike). He is also survived by his four grandchildren, David Jr. (Lindsey), Michael (Tiffany), Jennifer (Eric), and Kimberly (Rob). He is also survived by seven great-grandchildren as well as additional step grand-children, step great-grandchildren, and his sister, Mary Wilson. The Townsend family would like to thank the Riverside Walter Reed Hospice Team, especially Ethel, Lisa, and Marie, who provided such excellent care. Fred fought a long, hard battle with Parkinson’s disease. He will be forever loved and deeply missed by his family and friends. To honor his life lived well, the family held a visitation on Monday, January 16 from 6-7:30 p.m. at Hogg Funeral Home, 3098 George Washington Memorial Hwy, Hayes, Va. 23072. A celebration of life was held in the chapel of Hogg Funeral Home conducted by the Rev. Paul Song, on Tuesday, January 17 at 11 a.m. followed by a graveside service with military honors at 1 p.m. at Peninsula Memorial Park, 12792 Nettles Drive, Newport News, Va. 23606. At Fred’s request, memorial gifts may be made to Abingdon Volunteer Fire and Rescue, P.O. Box 9, Bena, Va. 23072. Services under the direction of Hogg Funeral Home.