‘Do we learn from history?’ CircleUp speaker asks 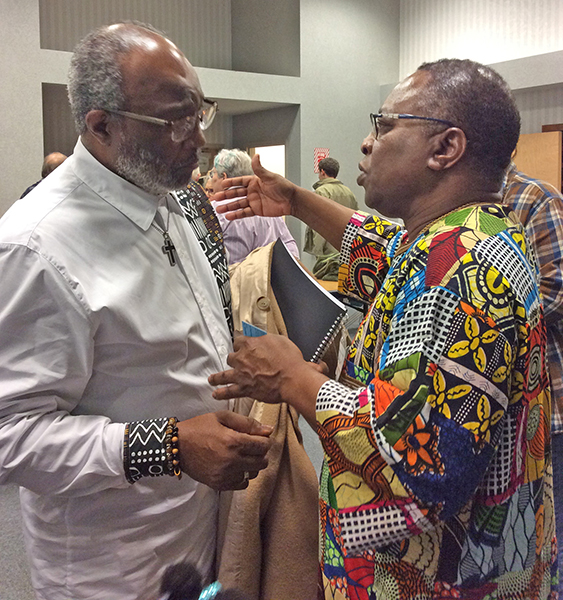 The Rev. Ward Warren, left, of Gloucester and Dr. Olusoji Akomolafe converse after Dr. Akomolafe’s presentation on Sunday afternoon at the Gloucester Library.

“Do we learn from history?”

Dr. Olusoji Akomolafe raised this question on Sunday afternoon at the Gloucester Library. That question would be repeated throughout his presentation for CircleUp Middle Peninsula, titled “Jim Crow Laws and Their Continuing Effect.”

The moniker Jim Crow, Akomolafe said, came from the culture of Nigeria and West Africa, which featured stories about a shape-shifting crow named Jim. Jim Crow laws were the legal backbone of racial discrimination in the South from the late 19th century through the mid-20th century.

Before the Civil War, explained Akomolafe, Blacks were not considered human, so they knew their place. This outlook ended when slavery was abolished. In 1865 and 1866, abolition, Black Codes limiting African Americans’ freedoms, and the birth of the KKK coincided; organization-sponsored violence replaced state-sponsored violence.

Akomolafe reminded the audience that the 14th Amendment in 1868 guaranteed citizenship and equal protection under the la...