Diving family from Mathews helping with invasive lionfish—by eating them 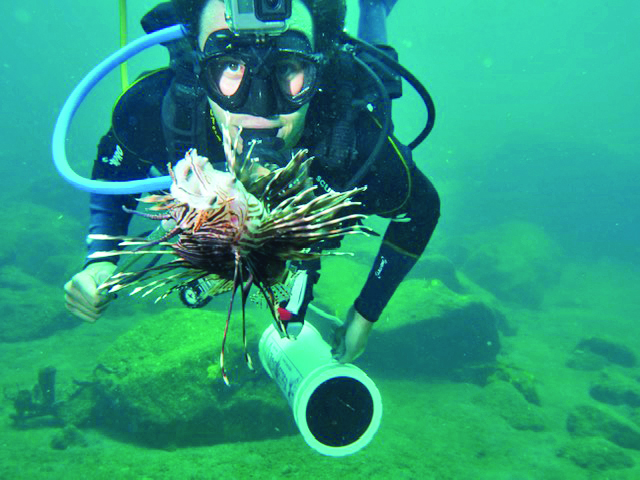 FAMILY PHOTOS Ryan White with a freshly-speared lionfish. Trimmed of their venomous spines, the fish are said to be delicious.

The lionfish is often seen in home aquariums, but in the Caribbean and U.S. Southeast coastal waters, it’s an unwelcome sight. The lionfish consumes other edible fish and has the potential of destroying reefs’ ecosystems. It was first sighted in 1985 in Florida, and with no known predators, it’s flourishing.

A mature female releases about two million eggs each year.

Because of lionfish’s venomous spines it is not yet a commercial product of the fishing industry internationally, but it’s a venture being worked on. However in some Caribbean ports, the firm pure white meat of the lionfish sells for $50 a pound.

A Mathews family is doing its part to help. Jay and Lisa White and their sons Dylan and Ryan are divers. They have met the lionfish, captured it with a spear, cleaned it, and then enjoyed it as an entree.

Lisa and Jay own and operate East River Construction, Inc., out of Richmond. In 2001 they decided Mathews was the place to be and built their home on Woodas Creek. Be...