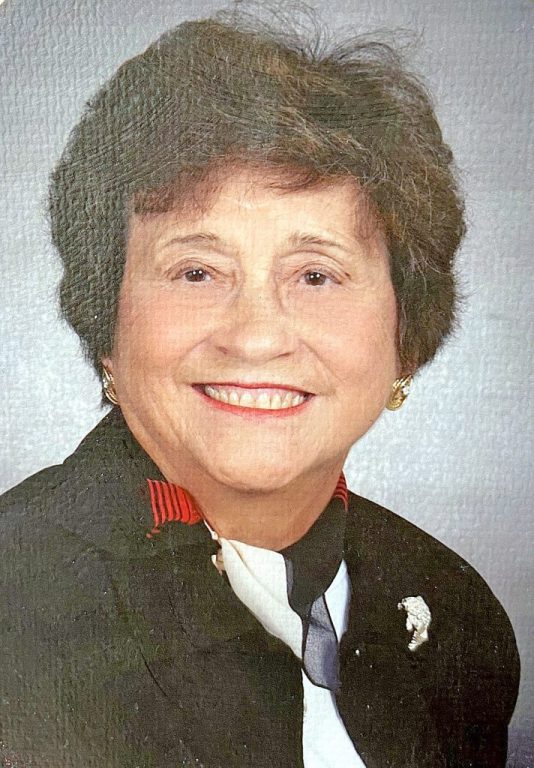 Dianne White Gray, age 92, after battling dementia, passed away peacefully in her sleep early Saturday morning, Feb. 6, 2021. She was preceded in death by her parents, Florence and Leonard White; brothers, Carey White, Jeff White, and Kirwan Rockefeller; sisters, Louise Mencius and Margaret Davis, husband, George W. Gray, and son, Robert G. Gray. She is survived by her son, George W. Gray Jr. (Mary); daughter, Cynthia G. Ellis (Brian); grandchildren, George W. Gray III (Katie), Matthew C. Gray (Lea), John L. Gray (Allie), Gordon T. Gray (Linda), Kaici E. Keithley (Chris), and Thomas G. Ellis. She is also survived by her five great-grandchildren, Jackson, Thomas, Margaret, George IV, and Madison. Dianne was born on Sept. 18, 1928 in Mobjack, Virginia. Although she moved to Richmond as a young woman, she was intensely proud of her roots in Mathews County. She would often tell anyone who would listen that she was just a simple country girl. After graduating from Mathews High School, she worked at the Naval Weapons Station in Yorktown. Like so many women at this time, her job disappeared at the end of WWII. She decided to move to Richmond, took classes at RPI, and began a brief period working as a bookkeeper. Soon she would meet her husband of 62 years, George, and it was not long before she began her career as a homemaker. For this her children are and will always be eternally grateful. Dianne was active in the Bon Air Methodist Church, the River Road Methodist Church, and the Discovery United Methodist Church. She was a member of Willow Oaks Country Club, Westwood Racquet Club, and the Princess Anne Country Club of Virginia Beach. She was deeply involved in Woman’s Club work. Dianne served as President of Bon Air Woman’s Club, the Lee District Women’s Clubs, and the Virginia Federation of Women’s Clubs. She was also member of the Tuckahoe Woman’s Club. In her late fifties, she decided to continue her education and became a student at J. Sargeant Reynolds Community College where she was awarded an associate’s degree and became a member on the National Honor Society. She was extremely proud that she was the first in her family to do so. She was an avid tennis player; she enjoyed her time playing in the Suburban Tennis League. She often played in, and sometimes won, various tennis tournaments sponsored by clubs in the Richmond area. Her favorite and most lasting victory occurred when she was a student at J. Sargeant Reynolds. She participated in an intermural tennis tournament sponsored by the school. One of her opponents that she defeated was a young girl who had just been awarded a scholarship to play tennis at Old Dominion. No small feat for a woman who had just became a first-time grandmother. She had a lifelong passion for fishing. Dianne had fond memories of fishing with her father on the waters around Mathews County. Later she would be seen standing for hours on the pier that was part of the property owned by George and Dianne on the Rappahannock River, patiently waiting for fish to bite. She took that same determination to Virginia Beach when George became tired of the maintenance required for river home ownership and bought a condo on Atlantic Avenue. Dianne was often found on the beach casting her line into the ocean surf. She had a deep pride in and love for her grandchildren. They would always look forward to her famous Lemon Lush and Butter Cookies that she would cook for special occasions in what seemed like unlimited quantities. The family would like to express their sincere thanks to Helen Johnston for her patience, compassion, commitment, and above all love that she showed our mother for the last few years of her life. Her acts of kindness will always be remembered. The family will receive visitors from 4-6 p.m. on Sunday, Feb. 14 at Woody Funeral Home at 1771 N. Parham Road, Richmond. A memorial service will be held at the same location at 2 p.m. Monday, Feb. 15. Precautions will be implemented to account for the COVID-19 virus.