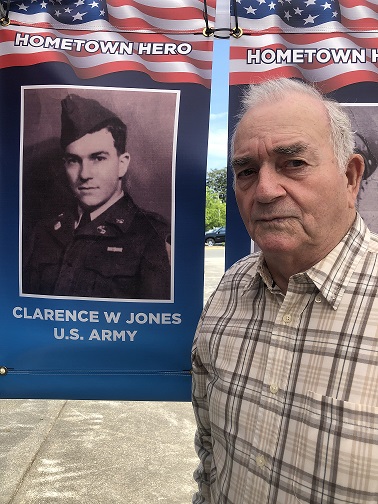 Clarence W. Jones Sr. left for his Heavenly home on the early morning of March 28, 2021.
He was born on April 9, 1932 and the only son born to George Wesley Jones and Christine Agnes Bartlett.
His wife, the Rev. Thelma Benson Jones, predeceased him on July 28, 2010.

He is survived by his four children, Debbie Montgomery and husband Ed of Ignacio, Colo., Donna Wright and husband Byron of Suffolk, Va., Clarence W. Jones Jr. and wife Debby of Newport News, Va., Karen McCann and husband Patrick of Gloucester, Va.; a sister, Lurlene Samuel of Saluda, Va.; six grandchildren; 14 great-grandchildren and one great-great-grandchild, with another soon to be born.

Clarence had been ordained in September of 1998 and was Senior Pastor of the Weems Calvary Pentecostal Tabernacle in which he took position upon the passing of his wife. He was also a Sunday school teacher for many years and loved to share his knowledge of God’s word to others. In his earlier days of ministry, he had traveled on mission trips to Haiti, Israel and Egypt and several U.S. states, as he felt God led him.

Clarence enlisted in the U.S. Army at the age of 17 and served from 1950-1953 in which he fought in several major battles during the Korean War. He earned the Korean Service Medal with six Bronze Camp Stars, United Nations Service Medal, Distinguished Unit Citation and the Presidential Unit Citation (Republic of Korea).

Clarence later became a carpenter and craftsman of his trade. Through the years, he worked with building contractors building many of the fine homes in the Northern Neck region. He was later noticed by James Wharton of Wharton Grove in Weems, who hired him to do repairs in the original style of the several cottages that still stood at the Wharton Grove Campground which had been used for revival meetings by Mr. Wharton’s father. The primitive style furniture he had built was also noticed and at times taken to New York to be sold. This became more than a side job for him, as Mr. Wharton later became a good friend who thought highly of Clarence.

After retirement, he took back up his love for carving and building various things that would give him a challenge. He eventually took to building various model boats that he would install with motors and remote controls that he could take out and run on the creek shore. Clarence was known for his “appetite” for the local oysters and crabs and never passed one up. He enjoyed any fishing opportunity that came along. He looked forward to springtime when he could prepare his garden for his tomatoes, green beans and green peppers and hoped for a good turn out on his fig bush.
Funeral services will be held at 2 p.m. Saturday, April 3, at the Currie Funeral Home with interment in Woodlawn Cemetery, Kilmarnock. The family will receive friends 6- 8 p.m. Friday, April 2, at the funeral home.