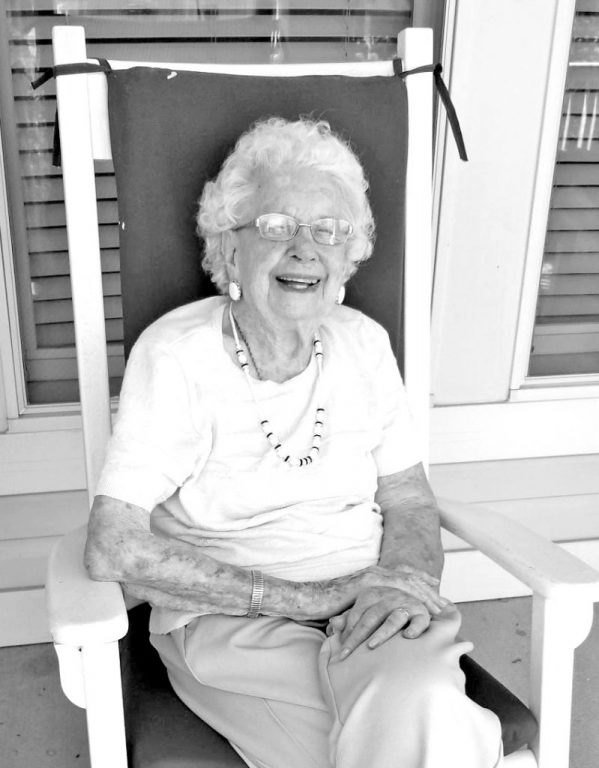 Audrey Stover died in her sleep on June 28, 2020 at her residence in Sunrise of Annapolis, Maryland.

She was born in 1921 at home outside of Leeds, Alabama, to the late Thad and Jesse George. She was also predeceased by her eight siblings; her husband, Hilliard (Smokey) Kelly Stover Jr., and her son, Richard George Stover. She is survived by her daughter, Patricia Hall (James); two grandchildren, Stacia Bontempo (Dave) and John Hall (Margaret), and six great-granddaughters, Caitlyn, Caroline, and Emily Bontempo and Alyssa, Grace and Olivia Hall, and many nieces and nephews.

After graduating from Leeds High School, she was recruited to work for the government in Washington, D.C., to support the war effort. There she met her husband-to-be who was stationed in Washington at that time. After the war, they raised their children first in West Point, then in Gloucester Point.

Audrey worked for many years at the Chesapeake Corporation in West Point and retired from Fort Eustis in Newport News.

While living in Gloucester Point, she was an active member of Abingdon Episcopal Church and of the local Al-Anon. She loved gardening, and travel, but most of all she loved being with her family. She moved to Annapolis 11 years ago to be closer to family.

In lieu of flowers, donations may be made to Abingdon Episcopal Church, P.O. Box 82, White Marsh, Va. 23183. A graveside service will be held at Abingdon Church on July 10 at 11 a.m.