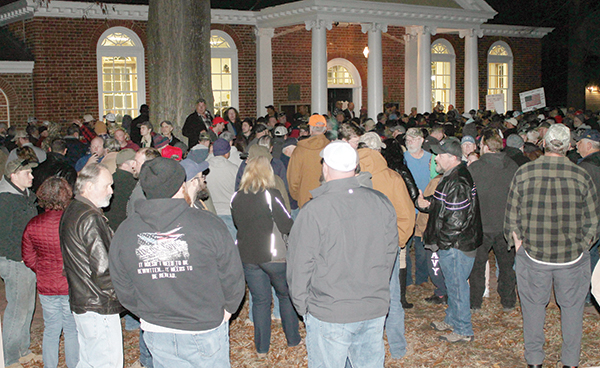 Second Amendment supporters came out in large numbers for Tuesday night’s Gloucester Board of Supervisors meeting. Their efforts were not in vain, as the board unanimously approved designating Gloucester County a Second Amendment Sanctuary. Photo by Sherry Hamilton

Second Amendment loyalists showed up in large numbers Gloucester’s Colonial Courthouse Tuesday night, filling all available seats inside and covering much of the court circle outside, standing shoulder to shoulder in support of a resolution designed to make Gloucester County a Second Amendment Sanctuary.

They were not disappointed.

After public comments that went on for an hour and a half, with over 30 people speaking in favor of the resolution and only four against, the Gloucester County Board of Supervisors voted unanimously to adopt the resolution, which expresses opposition “to any law that would unconstitutionally restrict the rights under the Second Amendment of the citizens of Gloucester County to bear arms.”

Further, the document resolves to use “legal means at its disposal” to protect those rights, including “through legal action, the appropriation of public funds, and the right to petition for redress of grievances” and to not use public funds of the county to “aid in the ...